I had some big ideas about how I wanted to raise my first child.  We knew we were going to have a girl and in those first few weeks of buying clothes, everything seemed to be pink.  Also, everything seemed to have frills, flowers, or flourishes of some sort.  I rebelled very quickly.  I pointed out at that there were any number of nice and comfortable outfits that could be worn by girls but that they were sold in the boys section.  In fact, I pointed out, everything in the girls section of our local Babies R Us (sorry, but I couldn’t figure out how to turn that R around.  Let me try again: Я!  There.  Happy now?) seemed to be made for a garden party or trip to church.  If you wanted to go outside and play, you had to shop in the boys section.  I firmly believe they should have a “fun” section or something like that.

Accordingly, well before Maggie was born and continuing well after, when Amy and I went clothes shopping for our daughter, I would head in one direction and she in another.  I didn’t get anything that said “Daddy’s Little Boy” or anything like that but why, I asked myself, did a shirt with a truck on it have to just be for a boy?  Were girls not allowed to like trucks too?  Or baseball?  Or even just the colors brown, green, or blue?  They all seemed to be solely the purview of those with dangles down below.

As it turned out, Maggie very much appreciated my point of view.  Perhaps she has come to appreciate it too much, in fact.

“I shop in the boys section,” she’ll proudly tell you.

“NO!” she’ll yell at you if you mentioned wearing a dress.

“Can I change now?” she’ll ask every seven seconds any of the three times a year she is required to wear a dress.

This is who Maggie is and I wonder how much of a role I played in making her that way.

Baby Maggie, dressed by me

It goes well beyond the clothes she wears, too.  A look through her toy chest (and by “toy chest” I of course mean “living room floor”) will reveal Lego Ninjagos, Kung Zhu Toys, and Beyblades.  If you don’t know what any of those things are, simply rest assured that they’re not sold in the same aisle as Barbies.  When we visit family, she spends much more time hanging around her cousins James and Daniel than, say, Caitlin and Audrey.  At school, she plays with the boys, always.

To be clear, this isn’t an issue for me.  I think it goes beyond being just a “tomboy” but it works for her.  She seems to be happy and well-adjusted.  She’s a good student, well-behaved, and, according to her teachers, a pleasure to have in class.  That she once burst into uncontrollable tears because she forgot to pack her Skechers to change into from her school uniform flats (girl shoes, to be sure) is just part of this package.

I do question if this part of her, though, is innate or whether or not my insistence of turning left inside the clothing store while Amy turned right played a role.

Perhaps my answer to this question comes in the form of our second born.

My son Henry’s favorite color is pink.  His favorite toys are Squinkies, Zoobles, and  Xia-Xia Pets.  If you don’t know what any of those things are, simply rest assured that they’re not sold in the same aisle as G.I. Joes.  When we visit family, he spends much more time hanging around his cousins Caitlin and Audrey than, say, James and Daniel.  At school, he plays with the girls, always.

To be clear, this also isn’t an issue for me.  As he says “I like girl stuff” and it’s absolutely true.  He too is happy and well-adjusted, well-behaved, and, according to his teachers, a big help in class.  That he chose a shiny pink plastic show horse as his souvenir when we went to the circus is just part of the package.

Squinkies won’t dominate your anything

The difference between how Maggie got to her disposition in life and Henry to his, though, may or may not have something to do with me.  Despite my insistence at, admittedly, sometimes dressing Maggie like a boy, I never thought it would be a good idea to get a frilly, pink dress for baby Henry.  I, at no point, thought we should buy a little “Mommy’s Little Princess” onesie for my son.  Point of fact, my plan with Maggie proved to be a financial boon to Henry as it was pretty easy to hand-me-down most of the clothes I picked a few years before.

The question of nature versus nurture, while unclear with Maggie, is crystal clear with Henry.  This is just who he is.

And there are advantages:  my kids don’t fight over all their toys, no gift is ever wasted, and rarely do we confuse what belongs to who.  Plus there are those moments when we can compare their particular tastes head-to-head.

They are both big fans of the “Build A Bear” stores and would happily build one stuffed animal after another.  Their choices are an excellent example of their tastes, of course.

Maggie, for instance, has a bear made of a lovely plush camouflage.  She regularly dresses this black, green, and brown bear in his karate outfit.  Named after a boy classmate, Varun Bear is up to his green belt. 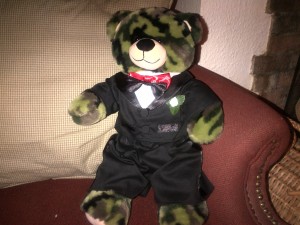 Varun Bear ready for a night on the town.

Henry, meanwhile, showers love upon his stuffed pink flamingo named Dot.  She wears a lovely pink gown in the style of his favorite Disney princess Sleeping Beauty (who he can accurately tell you is actually named Aurora.)  During a recent shopping trip, when given the choice of any of a number of items from the Build A Bear store, he chose a pink baby carrier so he could travel with Dot on his back or front.

I guarantee you that if you put these two kids on a bench and put their two Bears A Built across from them and asked a stranger to match them up, they’d be wrong every time.  And to beat that dead horse, I don’t care.  Whatever makes my children happy, as long as neither unsafe nor unhealthy, I’m good with.  I, after all, have gone ahead and purchased any number of these generally gender-specific toys and given them to the “wrong” gender.

Dot dresses down for a trip to the mall

I hear frequently from parents that they’ll change.  Any number of mothers have told me how they themselves used to hates dresses and make-up and anything pink and, one day, out of nowhere, suddenly they were, in their words, “all girl.”  Oddly enough, not a single father has told me he used to own a stuffed pink flamingo in a princess dress, though.  I’m not holding my breath for that one.

Part of me looks forward to a daughter that likes to wear a dress and fits some more stereotypical “girlie” definitions.  There is also a pretty good chance that Henry will one day be embarrassed by Dot and the pictures of him carrying her around like a baby.  If and when these changes come, I will probably embrace them and even enjoy them.  I also know this:  I will miss my son Maggie and daughter Henry and all the free thinking they represent.  Right now, at their young ages, they know who they are and are comfortable with it in a way only young children can be.  I can only hope they keep that confidence as they grow into adults. 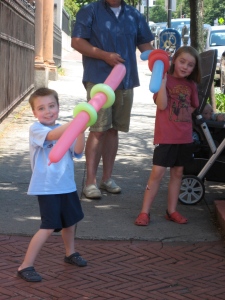 19 thoughts on “A Girl, a Boy, and a Pink Flamingo Named Dot”