“When God closes a door, somewhere He opens a window.”

I have never thought much about this quote, which, I have just learned, is actually attributed to The Sound of Music. I have been thinking about it these past few days and, in doing so, have come to the conclusion that I don’t like it that much.

This has nothing to do with my generally religion-free day-to-day life. Think about what it is actually suggesting. I mean, really, is a window the same as a door? They’re not at all used for the same things, are they? Also, there is no suggestion that this opened window is for your use. What if your door closed but your neighbor’s window opened? Does this, at all, help you?

There is the possibility that I am over analyzing the statement. If cross-examined under oath, I would have no choice but to admit that I probably understand the general sentiment. Perhaps, in fact, I understand it better today than ever before.

In my case, the door closing would certainly be the day I was laid off from my job a few days before Halloween. For me it closed pretty hard. It wasn’t just that I had worked at that company for twelve years. It was simply that, save for one month in 1995, I had been working uninterrupted since January of 1991.

I entered Boston University as a freshman the previous fall. I was extremely fortunate in that my parents could afford to pay the full fare for me at BU and I wasn’t required to engage in any sort of work-study situation. They even gave me a monthly allowance! As I said, I was a lucky kid.

Quickly I noticed how few other people in my classes, in my dorm, in the dining hall, or really anywhere, were equally as lucky. Living internationally during high school had prevented me from having any sort of regular job earlier and I hadn’t really noticed. But here, back in the U.S., it became quite evident that I was in a very small minority (perhaps a 1% minority?)

Before Thanksgiving had even rolled around, I had begun to feel downright guilty. Who was I to be so lucky while those around me, while surely not downtrodden or even necessarily poor, were, at least, working to do their fair share of the lifting for this very good education? I decided I would need to get a job just to feel less like a lazy heel.

In the end I found that the student union food court was about the only place on campus that hired students who weren’t in a work-study situation. I interviewed with them in November and they hired me effective the start of the next term.

From that point (as “pizza production supervisor”) to last November (as “regional director of operations”) I was employed in some job or another straight through (again, save for one month.) The period between my lay-off and my first part-time radio shift in mid-December was my longest period of time off since before I began that job working for “Itza Pizza.”

I have documented more than once the fun I have been having these past few months. There have been some very enjoyable moments in getting back to where I started in the broadcast profession. I have been very happy to get back on the radio after a few years of doing nothing but pushing papers in the glorious world of middle management.

What I have documented less is the feeling of insecurity that goes with being unemployed. There is something about the hustle and bustle of seeing others out there “earning their keep” while you are not that is very discomforting. Even simple tasks like going to a grocery store or filling the tank with gas forces you to confront people who have jobs. Being out and about in the middle of the day, I felt like I was wearing a sign across my forehead that said “UNEMPLOYED” and it wasn’t fun.

In November, sitting on a fat severance and months ahead of me before it ran out, it wasn’t a big deal. December brought the holidays. In January, though, the reality of unemployment started to set in and February, despite what the calendar would tell you, was a long month.

So that was my door. Where is my window?

That opens for me tomorrow morning at nine o’clock. 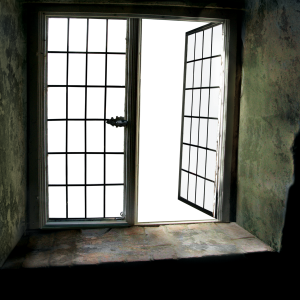 I am indeed returning to the daily grind. I am beginning what I would term a “bridge job.” It’s not exactly the kind of position I have been searching for but it is in the broadcast industry and it will put me back to work full time.

It was actually offered to me by one of the client managers I worked with these past many years. She essentially suggested that, knowing I hadn’t found anything permanent yet, she would like me to come work for her in the interim while I was looking. She further has given me all the flexibility I will need in the event of job interviews or other scheduling quirks that come with this unique position.

It’s the best of a few worlds: a full-time job with the flexibility of a part-time one that acknowledges that I will be looking for something else while working there. It’s in the industry and probably even offers opportunity for growth right there. For all I know, my next job may be right in the same place as this new one. If it isn’t, when it comes time to move on, they will wish me well and we’ll both have hopefully benefitted from the experience.

But aside from all that this specific position offers it is also, quite generally, a job. Sometimes it is as simple as that. I will no longer be unemployed. It is a word, a statistic, which is so often bandied about in politics and in the news that I think too many people don’t truly appreciate it for what it means. Most of the unemployed I suspect want desperately to work and not just for the money. Money probably isn’t even the primary motivation (though surely a very close second.)

There is an undeniable satisfaction that comes from working. Despite what the angry televised talking heads will tell you, most people don’t want a handout. Most people want to earn their way through the world. Free money isn’t really free. It comes with a cost.

I didn’t build a pallet because of a love of pallet building. I built it because it was an actual tangible job that I could see accomplished.  I could feel that I had done it. When I was done, there was something there that wasn’t there before. That cause-and-effect was something I had come to take for granted in my many years working before. I hope not to do that again.

So my window is open and I’m hopping through it. I don’t think my “journey of transition” (boy, I’m taking myself a little seriously tonight, aren’t I) is yet complete. This is my bridge — remember? Of course, when we bought my last car, I considered it a “bridge car” that we would have for a couple of years before getting a bigger one. That was six years ago and counting. Some bridges are longer than others.

Since accepting the job two days I ago, I have been tying up some odds and ends before going back to work tomorrow. After braving another trip to the Girl Scout HQ to pick up more cookies this morning, I was officially out of tasks on the to-do list.

So, on my last day of unemployment today, I partook in the sort of thing I hadn’t done much of these past four months. I played golf with some friends. One of my playing partners was someone that was let go literally a few minutes before I was and the other is someone who is likely facing the same fate before the end of the month.

It was an interesting conversation over our nine holes under grey skies and a chiller-than-expected wind. With me going back to work tomorrow, one guy not yet having found another job, and the third with this experience still ahead of him, we hit on all sorts of themes centered around working (and, more notably, not working.) Who had we spoken with? What companies were expanding? Which were cutting? Who else did we know who was still working and who else did we know who wasn’t? All three of us are looking for work, one way or another, and all three of us are at a different point in this search.

At the end of the day, we all agreed that it was a great round of golf and we should do it again. In fact, I think the other two guys have already set up a tee time for next week. I, fortunately in this case, won’t be able to make it. I’ll be working.

One thought on “My Door…My Window”