When I was a kid we, as a family, didn’t really get out all that often.  I remember going to two movies (Star Wars in 1977 and Moonraker two years later) and occasionally making it to a restaurant.  Our family vacations were always to the houses of aunts, uncles, or grandparents.  All in all, we spent most of our time at home or in the environs nearby.

I understand why, too.  There were five boys in my family and going anywhere would be both an adventure and expensive.  We would occasionally have pizza or McDonald’s at home and, once video rental places were invented, we would take advantage of those.

My kids live a different life.  We get out and get out often.  We take them to the Children’s Museum and the New England Aquarium.  They’ve been to the movie theatre to see any number of their favorite movies and we go out to eat often enough that both Maggie and Henry know enough to ask whether or not the Red Sox won the day before prior to suggesting the 99 Restaurant as a destination.  Why?  Because kids eat free after a Red Sox victory, of course.

We’re also not afraid to fly with them.  Maggie, by virtue of being the oldest, is already a veteran of well more than twenty airplane flights.  She’s been to Atlanta and Indianapolis.  She’s been to San Francisco and the island of Grand Turk.  Oh, and she’s been to Disney World.  Four times, I think.  Henry’s been at least twice.

I’ve talked about nature versus nurture before and I think this would fall right into that area as well.  I was raised in a Disney-free household or, at least, as Disney-free as possible.  I do recall a really neat glow-in-the-dark calendar with Mickey, Minnie, and the gang.  I vaguely remember seeing Fantasia and maybe Bambi at some point but beyond those things, ours was a primarily a mouse-free existence.

Our one big exposure to the world of Disney came with a trip to Disney World in the mid-80’s.  It was a treat from my grandparents who apparently tired of all these kids descending on their home.  I don’t mean to sound ungrateful, but this is where the nurture part of my own aversion to all things Magical grew its deepest roots. 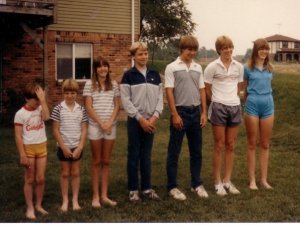 My mother made it clear to all that would listen that she had no desire to go to Disney, even while driving all the way down the east coast to get there.  Pretty much all the way from New Jersey to Orlando, it was left doubtless that this wasn’t a vacation in which she was particularly interested.  This point of view was also shared by my brother Ted, at least publicly.

While I don’t remember the exact year, it is fair to assume I was somewhere in my early teens for this adventure.  There were probably any number of other places that would have been more educational and edifying for us to go to, but Disney World isn’t exactly a bad place to vacation.  They did, after all, have roller coasters and water flumes and bad-for-you food.  It was summertime and, had we stayed home in New Jersey, I’d probably just be watching television anyway.

So, in my mind, I didn’t really get what was so bad about this trip.  I wasn’t about to share this point of view, though, as I felt pretty well pressured to side with the anti-Disneyites.

In the end, I actually remember remarkably little about the trip.  I vaguely remember walking around Epcot and through the Countries of the World.  I know we did Space Mountain a few times and I also drove those cars in Tomorrowland.  But beyond that, I can’t say.  I’m pretty sure Animal Kingdom didn’t exist yet and I don’t know about that movie-themed park whose name I can’t even remember right now.

I can only guess that I had a good time there seeing as how I don’t remember otherwise.  But to hear my brother and mother talk about it, it was the worst trip EVER!  Mind you this was an all-expenses paid trip to an amusement park and these two people, who happen to like, if nothing else, roller coasters very much, couldn’t be bothered to even like that.

So this is the environment, the nurturing environment if you will, in which I was taught to hate Disney.  It is something I’ve come to do well.  Then I met Amy.

Amy loves Disney.  She really loves it.  I cannot speak as intelligently about from where her love came as I can from where my lack of it does.  But, if you think about it, isn’t it more natural to love it than not?  Disney makes their oodles and oodles of money by being a machine that does nothing as well as it does making children love them. 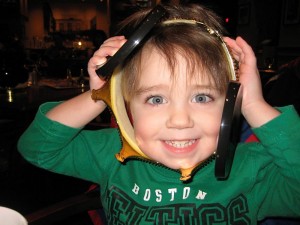 Maggie and Henry love pretty much every Disney movie they’ve ever seen.  They own stuffed Mickeys of numerous different ilk.  Henry, as a two-year-old, fell deeply in love with Goofy and I still don’t know why.  The twins have a set of Chip N’ Dale plushes that serve as their introduction to the Wonderful World of Disney.  Occasionally, just as a test, I’ll start Toy Story 3 or Meet The Robinsons or Tangled or any of a number of different animated movies I have on my computer (we’re fans of the DVD Combo packs that give you a “digital copy” along with the others) and those two babies will toddle over and take up residence on my lap, one on each side.

There is something innately attractive about Disney to kids.  That’s just the way they designed it and it’s why they could drink gold like that guy in the commercial.  (He’s about 45 seconds in but do yourself a favor and watch the whole thing.)

Most of the time, we have to travel to see Disney but twice a year, Disney comes to us.  Disney On Ice is a huge favorite in the Hook house particularly, it seems, with Henry.  Some of his earliest words were, I kid you not, “ice show.”  I once while make a video for his Uncle Phil, I gave him a number of things to say which he parroted back.  At the end, I asked if he had anything of his own to say.  His response, nonsensically, was simply “ice show.”  You can watch it here.

I’ll admit that I was, at best, a grudging participant at my first Disney On Ice spectacular.  Of all the Disney money-makers, I felt there was something particularly crass about an ice show.  Frankly, I think this has more to do with ice shows than it does Disney.  I know all those former Olympians who become travelling performers end up doing some severely dumbed down version of that which gave them their acclaim.  I felt, having never attended one, that ice shows were some sort of lowest common denominator version of entertainment.  Then I watched my kids watch the show. 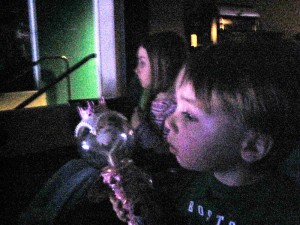 They were enthralled.  Their eyes were literally wide.  Henry, at two or so, seemed absolutely entranced by what he saw.  There were lights and music and things from falling from the sky.  For the 90-minutes or so that there was action ongoing, these two kids were not to be moved from their seats.  Henry took home his full-color, photographed-filled collectible program and flipped through the pages time and again.  He talked about “booty witch” (a.k.a. Sleeping Beauty witch, one of the bad guys in our first Disney On Ice) almost every day and to anyone who would listen.

We’ve been back to every show that comes to town since.  We’ll be going on opening night at the Garden this year, the day after Christmas.

Last year they even went in costume.

I still don’t have any great love for Disney, this despite having now been back to Disney World with my family three or four times, gone on a Disney cruise (without the kids, no less), and seen literally every animated feature they’ve produced in the last twenty years.  I don’t do it for me; I do it for the rest of the family.  Though, to be honest, even that isn’t entirely true.  The anticipation that Maggie, Henry, and even Amy have for our trips down to the Garden is wonderful and it rubs off on me a bit.  When we go, I generally sit behind them all.  From my perch, I can watch them watch the show and see all the excitement and wonder that it brings to their eyes. If it is Mickey Mouse on ice skates that brings it on, so be it.  This is, in the end, truly a case of “if they’re happy, I’m happy.”  When it comes to Disney On Ice, let there be no question, it makes them very, very happy.

(If you’re interested in checking out this year’s Disney On Ice: Treasure Trove, tickets are still available at www.tdgarden.tickets-center.com)

5 thoughts on “Disney On Nice”